Recently, I saw an alarming amount of posts on r/The_Donald, the largest online group of Trump supporters, claiming that a Washington Post author offered to pay women $1000 to accuse Moore of sexual misconduct for an article about Roy Moore’s unwanted sexual advances towards a 14 year old girl. Here’s the tweet that sparked all of this: https://twitter.com/umpire43/status/928783143099883520

Here is a small sampling of those posts:

Unfortunately, this increase of misinformation stems from a multitude of issues. First off, the r/TheDonald subreddit is that the mods custom programmed the CSS of the subreddit so that it makes it impossible to downvote any post unless if it appears on a user’s reddit main feed:

Secondly, the top comments of most of these posts seem to reinforce the post without fact checking the post: 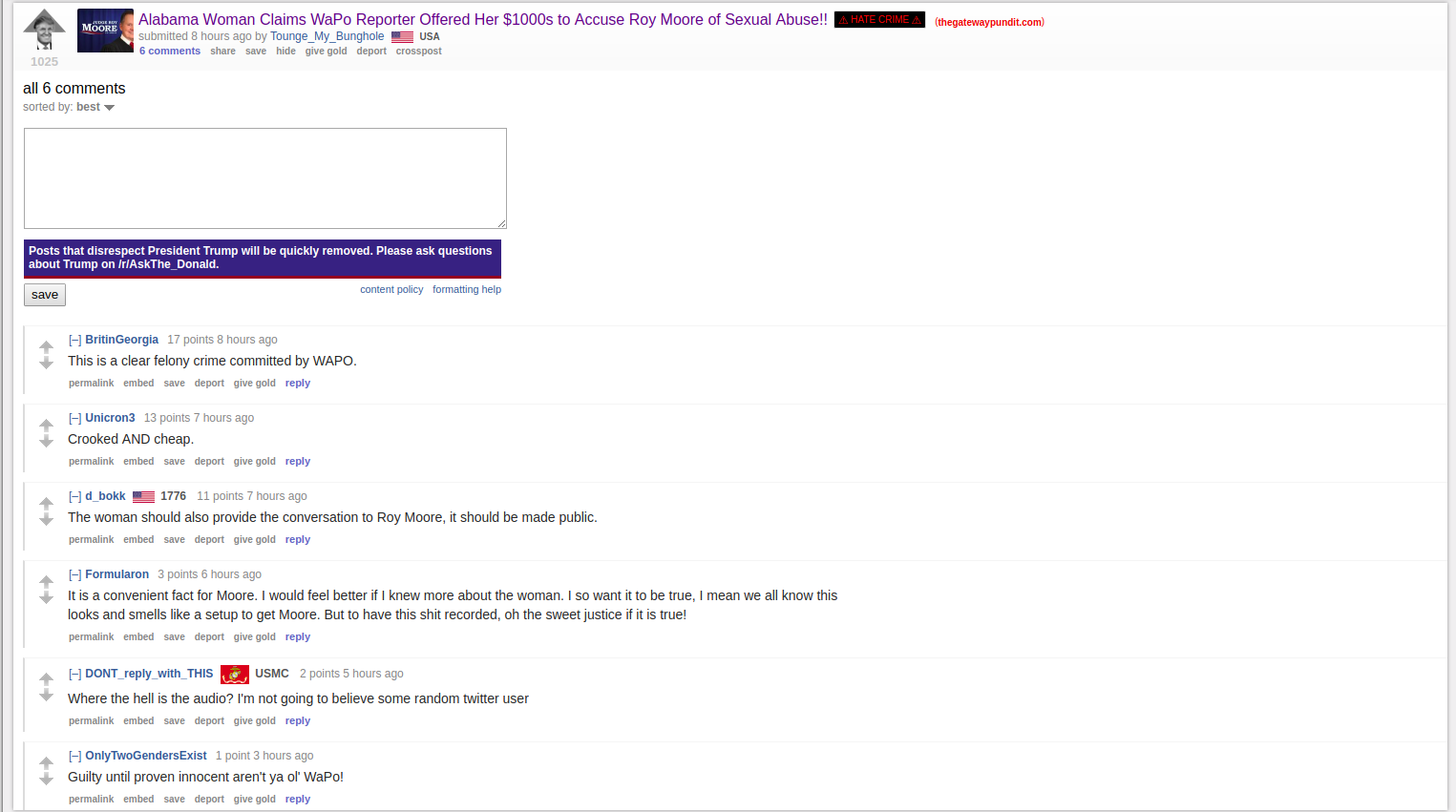 Thirdly, although there seems to be a bot in place that is supposed to fact check these types of posts, that bot didn’t seem to comment the validity of most of these posts which claimed the reporter paid off women to speak poorly about Moore. This community needs a better way to make sure that its readers don’t get false information since most of the people seem to take the information at face value.

Nevertheless, some members of this community spoke out against this misinformation after seeing the bot comment that the source could be unreliable which shows the effectiveness of enforcing a bot which encourages users to check the source.

This incidence speaks volumes about how people believe information that aligns with their political views. In this instance, I wish the people who believed this claim about the reporter to check the source of the information. A quick fact check would of shown that the source was a Tweet from a user who spouses controversial and radical viewpoints. Moderators of big political subreddits like r/The_Donald and r/politics need to share resources towards their community to make sure what is a reliable source on the internet.

On a side note, I think it’s worth investigating suspicious Reddit accounts to see if any are potentially bots trying to stir up something. Especially with the recent news about Russia creating fake Twitter accounts, I wouldn’t be surprise that “Doug Lewis” (the person who started all these false accusations) is a Russian bot.